By 2022, anyone who is working age and claims the benefits below will be moved to the new system called Universal Credit: Income Support, Housing Benefit, Working and Child Tax Credits, Employment and Support Allowance (ESA), Jobseekers Allowance (JSA). 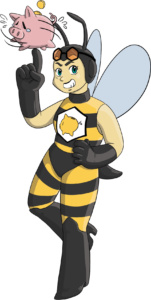 In theory, it’s simpler with one benefit instead a mix of these six. Most people have had no problems, but many people have struggled. So we asked claimants who were first to move onto Universal Credit how they’d found it.

Here’s what they told us:
(Click the topic to expand)

The Key Issues: How Universal Credit (UC) is Different From the Old Welfare System

Almost everything is different about Universal Credit (UC) compared to the old system:

The 3 Bs: The Quids in! Rule of Thumb for Avoiding the Pitfalls

The biggest pitfalls claimants tell us are around their Banking, Budgeting and Being online. Looking through the big issues above you can see why we’ve arranged some help under the 3 Bs… or the three bees you’ll see hovering around this page. In a way, they want to bug you into action because nothing will sting you worse than not being prepared in advance of moving across to UC.

The three bees also star on our Guide to Universal Credit, a 32-page walk-through of the system – ask you landlord or local council if they have free copies. Otherwise, you can buy a copy here.

As a rule of thumb, if you have the right bank account (Banking), check you will have more coming in than going out – and what to do if you won’t (Budgeting), and know where and how to use a computer and the internet (Being online), you’re more likely to be fine.

And if you’re any the six benefits listed above, start putting those things in place now. Try not to become one of the four in five (79%) Universal Credit claimants who, in early trials, were in rent arrears by the time they receive their first payment.

Read more about the message of the 3 Bs.

Promises Promises: Is the New System Really Better, as the Government Says it is?

Read more about better off in work.

10 Things You Need To Know: What Claimants Know Now That They Wish They Knew When They Started

Below are the ten headlines Universal Credit claimants told us to pass on. Have a think about which ones might apply to you. If they do, follow the links for more information. And remember, don’t panic! There are people who can help and it’s easier when you go into things with your eyes open, which is probably the best advice we could give you about Universal Credit.

What To Do Now: Next steps for anyone who is or will be moving onto UC

There are two things we recommend you do straight away, if you are worried:

Read through the information here, and try to get hold of a copy of our Universal Credit Guide which has more detail, and write down all the questions you have at the end.

Now find out who can answer those questions. This can range from your local council or your landlord, through to national advice lines and websites.
We’ve listed the most important ones here.

We use cookies to ensure that we give you the best experience on our website. If you continue to use this site we will assume that you are happy with it.OkRead more at our publisher site