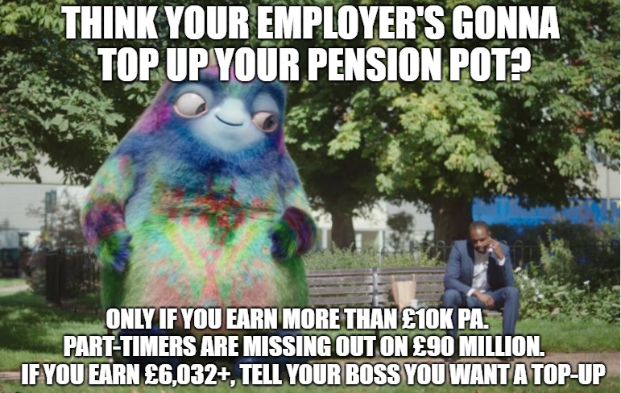 Part-Timers Miss Out on £90 Million

Low paid workers are missing out on pension top-ups worth millions, research by insurance company Scottish Widows has found.

Rules since 2012 mean employers must top up workplace pension payments unless staff actively opt out. This applies to workers earning at least £10,000 a year but anyone earning £6,032 or more is entitled too.

Scottish Widows found that around 1.8 million people were in multiple part-time jobs and “slipping through the net”. People could work full-time hours but, unlike those working one employer, not receive the extra boost to their pension pot.

Part-time workers could be missing out on a scandalous £90 million between them. Scottish Widows is calling for the minimum earnings threshold to be scrapped. It is an “unfair barrier” that stops low paid workers from saving for old age, they said.

Advisers say ‘multi-jobbers’ and low paid workers (earning more than £6,000) should tell employers they may qualify for pension help.

However, one in five (21%) younger people do not save anything for later life.