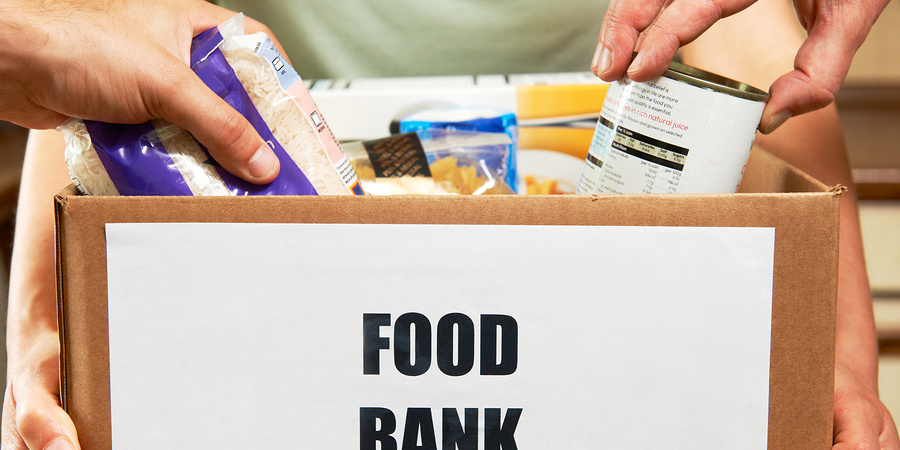 Foodbanks have become an everyday feature of life for the worst-off families in Britain. A new report has found welfare reforms are forcing claimants to turn to the kindness of strangers to keep their families fed

“I felt embarrassed. It’s like begging for food. People I know say they would rather get in more debt than be seen going to a foodbank.”

“But I had no money left. I had large bills to come out and £1,500 rent arrears due to a mix-up with housing benefits and some bad advice. I had debt collectors writing to me.”

Finally, Quids in! reader Helen had no choice but to ask for help and turned to her local foodbank.

What would we do if all our income stopped? Whether through a mix-up or while moving on to Universal Credit, how would we cope if it took months to sort it out? We pay taxes so we are taken care of when we’re out of work or when disaster strikes.

But the system is not working. It seems there’s not enough to go round and what money there is for benefits takes weeks to kick in. Helen is one of more than a million people in the UK forced to turn to a foodbank last year. The largest network of foodbanks, run by the Trussell Trust, has over 425 and supplied donated goods to 1.2 million hungry customers.

FILLING THE WELFARE GAP
A report by the Trussell Trust reveals that things are getting worse in places where the government’s new Universal Credit (UC) is rolling out. The new benefits system pays a month in arrears and takes at least six weeks to start but many claimants find their claim is difficult to set up and waited three months for their first payment.

The research found in these areas, numbers of people needing their support doubled. To receive 3 days’ worth of food and support, users are usually referred by a support agency, like Citizens Advice or a housing or employment support project, or even a GP. 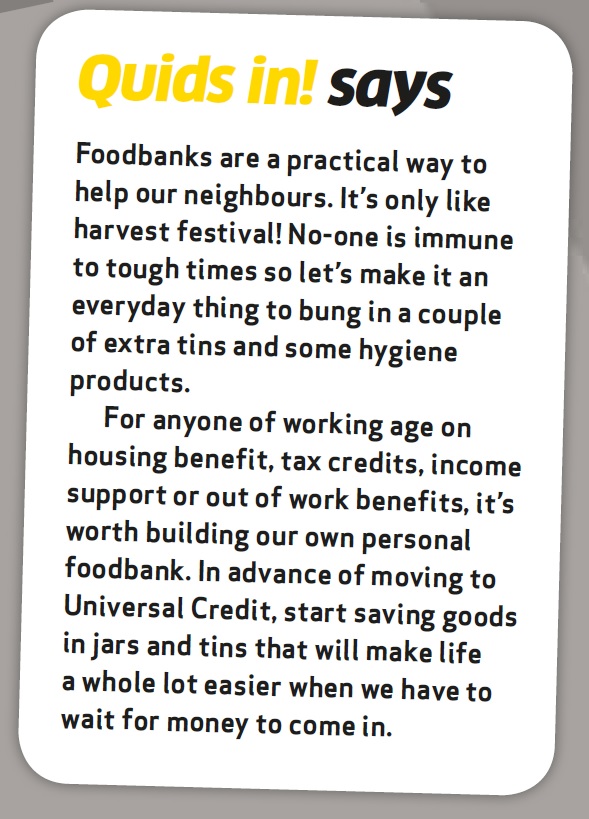 Part-time worker and student Helen had children to feed. “The foodbank helped me save money for a week’s food and meant I wasn’t worrying about feeding my family.”

“The process was good and the staff were so friendly and discreet. They asked what I needed, then gave me toiletries, loo roll and enough dry food – pasta and tinned food – for a week.”

The shelves at foodbanks are stocked through donations by shoppers who pick up a few extra items to pass on to people who need them. Some supermarkets have collection areas, emptied by one of over 40,000 volunteers nationwide.

Quids in! reader Michelle says she checks what the local foodbank say they need most before donating. “It’s normally something like a tin of beans, long-life milk, shampoo or cereal.”
“I donate because I know that people in my local area are struggling to make ends meet,” she adds. “I can donate something small each week without really noticing it
on my food bill.”

MORE THAN A HAND-OUT
The Trussell Trust found having no income created more problems than hunger. Among those moving to UC, one in four felt their mental health was affected, two in five had worsening debts, and one in five reported that it impacted their ability to work and/or their housing.

In response, a number of foodbanks now also offer money advice, support for families with children over the school holidays and courses for cooking on a budget. There are no signs that the tough times many communities are facing or the changes to the benefit system will end any time soon. Foodbanks and similar schemes, like community kitchens and neighbourhood food parcel projects, may become all too familiar.

Helen says she found more than a hand-out at the foodbank. She met others in a similar position and linked into other support on offer to her and her family.

“They gave me a cup of tea and a biscuit. They actually spoke to me. People played with the kids and I found out about a toddler group for the children.”